We are very proud to announce that Uncle Louie won the Audience Award at the 2011 Columbia Gorge International Film Festival. Director Al Russell and Producers Joe Izzo and Joe Mangelli were there to discuss the film after the showing. There were lots of belly laughs throughout the film, especially in the scenes with bad guy Mikol Garcia and Michael Senter as well as the scene with Carrie Mangelli.
Posted by Susan at 11:48 PM No comments:

Uncle Louie is scheduled to be shown on August 12, 2011 in Vancouver Washington. This is a very well organized small indie film festival AND it's free! Let us know if you can attend. Uncle Louie would love to see you all there!

Great News! Uncle Louie was selected to be shown at the Columbia Gorge International Film Festival in beautiful Vancouver Washington. We are honored!

Our experience with film making has just begun. We plan on having a San Jose premiere benefit for Bill Wilson. At this premiere you will see Uncle louie, our first episode of Wounds, plus live music by Chad Leiker. There will be give aways and an extensive question and answer. I encourage all of you to save a litttle money and when you buy your ticket a percentage will go automatically to the Bill Wilson Group Home to help feed and clothe the kids.
Posted by Joseph Izzo at 8:14 AM 1 comment:

Another highlight of our trip to New York was a visit to Niagara Falls. It was spectacular! 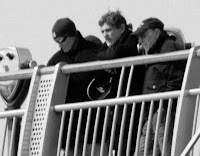 
We all met for lunch at The Red Coach Inn by the Falls and enjoyed one of Joe Izzo's better rants.

The day of the premier was packed with events starting with an early morning interview at the TV station on AM Buffalo.

The afternoon was spend setting up for the film premier and the premier party at the famous Pearl Street Grill and Brewery. There was lots of good food and beer on tap. Dozens of Joe Izzo's family showed up in mass to celebrate. It was a long overdue reunion for producer Joe Izzo. Both his mother and father had been born and raised in Buffalo. He saw relatives that he hadn't seen since he was a child.

We had to compete with the Saber's play off game, but their interview from that morning on AM Buffalo was shown again on the evening news while we were in the bar complete with Chad on his ukulele.

The film was shown that night at an older theater in downtown Buffalo, complete with 2 life size Buffaloes in the lobby. Downtown Buffalo was very interesting mix of classic old brick architecture and the ultra modern as well as an eclectic mix of friendly folks.

It was truly awesome to finally see Uncle Lou on the big screen!
Posted by Susan at 3:15 AM No comments:

Our journey to Buffalo for the festival proved an experience I will never forget. Seeing Uncle Louie on the big screen thrilled me beyond words. On the big screen it opened up like a rose in bloom. It belongs on the big screen. The story and all of its twists and turns were less mysterious and more apparent. Our next step is to have a premiere here in San Jose. I hope to make it a benefit for the Bill Wilson Group Home.

Posted by Joseph Izzo at 7:09 AM No comments:

Promote Your Page Too